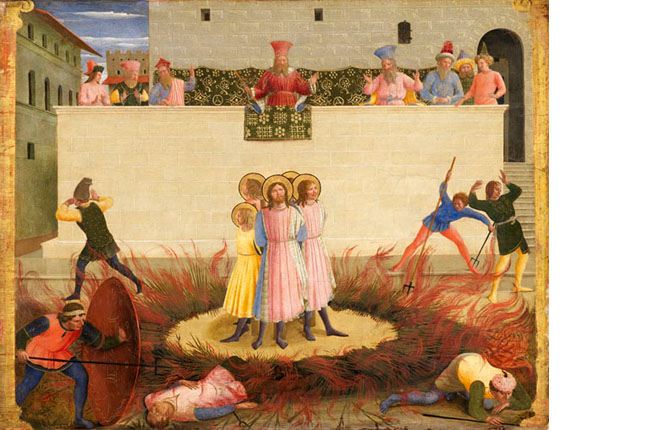 Saints Cosmas and Damian and their Brothers Surviving the Stake

Cosmas and Damian were two physician brothers living in Asia Minor in the third century. They and their three younger brothers were Christians, and during Diocletian persecutions they were compelled to prove their loyalty to the traditional gods with a sacrifice. When they refused, Lycias, the Roman Consul, submitted them to a series of brutal tortures. Miraculously they survived the torments but, finally, the enraged Consul has them all beheaded.

The episode represented here is the fruitless attempt to burn the five brothers. A circle of flames surrounds them, but the fire turns against the torturers, under the incredulous eyes of Lycias and his dignitaries.

This small panel was part of the predella (lower register) of Fra Angelico’s most important altarpiece. Other parts of it are scattered in various galleries worldwide. The altarpiece was painted for the church of San Marco in Florence, and was commissioned by Cosimo de’ Medici – whose name is echoed in the profession of Sts Cosmas and Damian (‘medici’ means ‘physicians’ in Italian).

Fra Angelico is one of the great Florentine Renaissance masters. In 1407 he entered the Dominican monastery of Fiesole, assuming the name of Fra Giovanni. Within a few years he had become the most acclaimed monastic painter in Italy.